GameStop Saga: Know What All Happened? 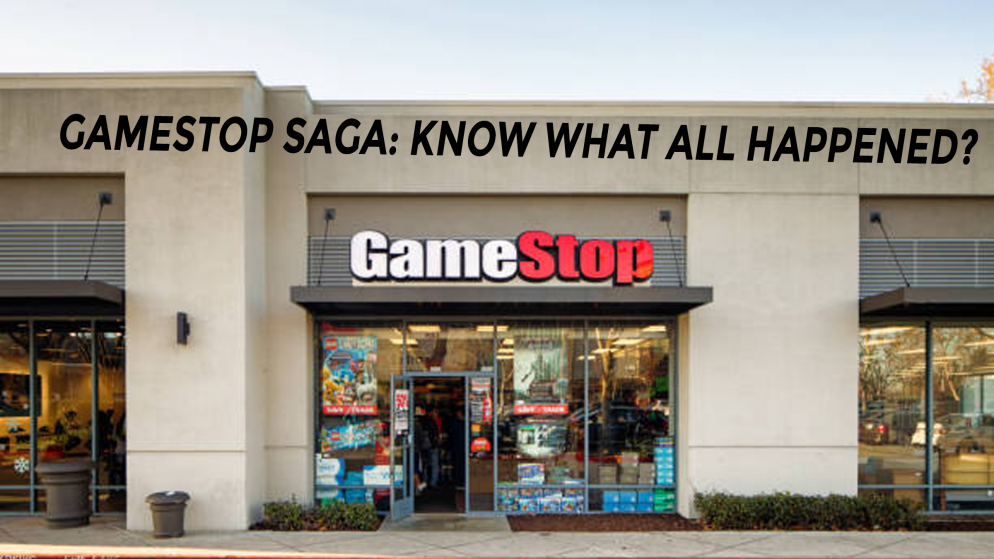 Do you want to hear a story? It’s a tale as old as time – where the young and poor start a crusade against the old and the wealthy. A war takes place. A war for redistribution of wealth among everyone, not just a few. It sounds like some fantasy TV show, right? 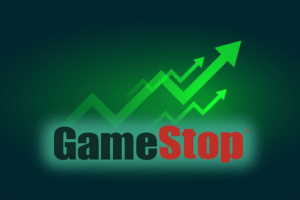 The story we’re telling today is not fantasy. It is very much real and took place in 2021. It’s wild and crazy, has unexpected twists and turns. Some interesting new vocabulary runs the story. The Tesla CEO Elon Musk makes a special appearance too. It is the story of how a group of individual traders on a Reddit thread sent the stock of GameStop to astronomical heights.

It all started last week when the members of the infamously anarchic Reddit stock trading thread r/WallStreetBets pushed up the shares of the struggling game retailer GameStop. Seasoned analysts on Wall Street had been betting against the success of GameStop. But the members of WallStreetBets rallied the market by creating a demand where there had been a little before.

This frantic trading saw the GameStop stock jumping more than 822% from $17.25 per share at the beginning of the year to $158.18 per share on Monday. Tuesday saw the price drop by nearly half, only to rise to $147.98 per share.

Then comes a tweet from the notorious Tesla CEO, Elon Musk. He tweeted about using a weird internet vocabulary (more on that later), and the share prices jumped 40% in after-hours trading. The result – the trading closed at $347.51 per share on Wednesday before dropping again in after-hours trading. Thursday saw the prices rise to $843 per share before halving again. 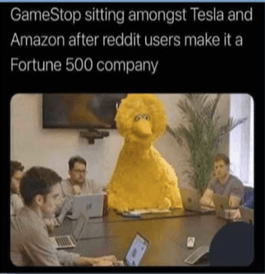 The New York Stock Exchange (NYSE) halted GameStop stock trading more than a dozen times before midday Thursday. Amid all the chaos, Thursday ended with a price of $193.60 only to jump back up!

How did this happen?

GameStop is one of the leading video game retailers in the world. However, it has struggled with relevancy in the new age of online sales. People on Wall Street believed that GameStop’s stock would fall, and they short sold the stock aggressively.

The members of the Reddit thread r/WallStreetBets had a contrary belief. The thought that Wall Street was making a huge mistake. They knew if they could create an artificial demand for GameStop’s stock with their own money, they could force Wall Street to recant their bets, thus pushing the prices even higher. They also knew that the investors who couldn’t back up their bets against GameStop would have to pay much more.

All this activity has created what is known as a short squeeze. A short squeeze is when the short-sellers who previously bet against GameStop are now forced to buy more of its stock to cover their losses, thereby pushing the stock price up even more.

As the short-sellers buy more of GameStop’s stock, the price is pushed up higher and higher. Some Reddit members believe that the stock price could reach as high as thousands of dollars because of this mechanism. 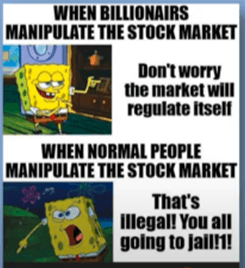 What is short-selling, and how does it work?

Usually, when people buy a particular stock, they’re betting that the price will rise and make money when that happens and lose money when it does not. Short-sellers do the opposite. They trade with borrowed shares and sell them with the belief that they will make money if the stock fails in the future. If proven right in their bets against the company, they make a lot of money. If their bets falter, they can lose a lot of money too.

So, what did this Reddit crusade cost the Wall Street short-sellers?

According to MarketInsider, the Wall Street short-sellers seemed to have lost a tremendous amount of money to the tune of $3.3 billion, of which approximately $1.6 billion (or about half) was lost on Friday alone when the stock jumped 51%.

Why are the members of the Reddit group WallStreetBets doing this?

Easy money is one of the significant compelling factors driving this frenzy-trade by the Redditors. It is tempting in and of itself if you’re comfortable with the risk involved. However, some of the Redditors are also labelling it as a crusade against Wall Street. One of the Reddit members posted, “We are at war. A war for redistribution of wealth.”

Some new vocabulary has come up!

The entire GameStop situation is unusual and crazy as it is. What adds to its unusuality is the new vocabulary or lingo that drives the trading action. Let’s look at some of the lingoes behind the chaos and what do they mean:

And now – the promised cameo by Elon Musk:

Tesla CEO Elon Musk tweets prolifically. His tweets have the power to drive people to various companies’ stocks. One day he casually tweeted how much of a joy it was to buy something for his dog from Etsy, and Etsy’s stock jumped. 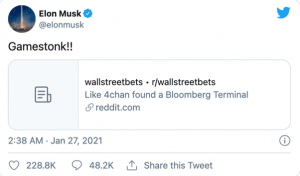 He did the same with GameStop. He tweeted to his 43 million Twitter followers using the weird internet vocabulary, of course adding fuel to the frenzy.

What is happening now?

What started as a quantum joke has now begun to crumble and falter. A tremendous amount of money has been piled into the company from a massive array of investors. On Thursday, trading platforms like Robinhood announced that they would stop the trades on GameStop stocks and other stocks favoured by WallStreetBets.

The Redditors took this as a war cry, and about an hour and 10,000 comments later, they were on the warpath. The top reply to the top comment reads, “I was done buying. Now I’m gonna switch brokers and buy more. I can’t believe how hard they’re trying to mess up the little guy.”

The Reddit driven rally for GameStop is a very unusual phenomenon which many describe as an insane Ponzi scheme. The stock market has become a battleground of a huge stand-off between the Wall Street and internet traders.

No one is sure about how this might end; other than the fact that a lot of people are going to be losing a lot of money. This is one joke that will leave many people not laughing in the end. 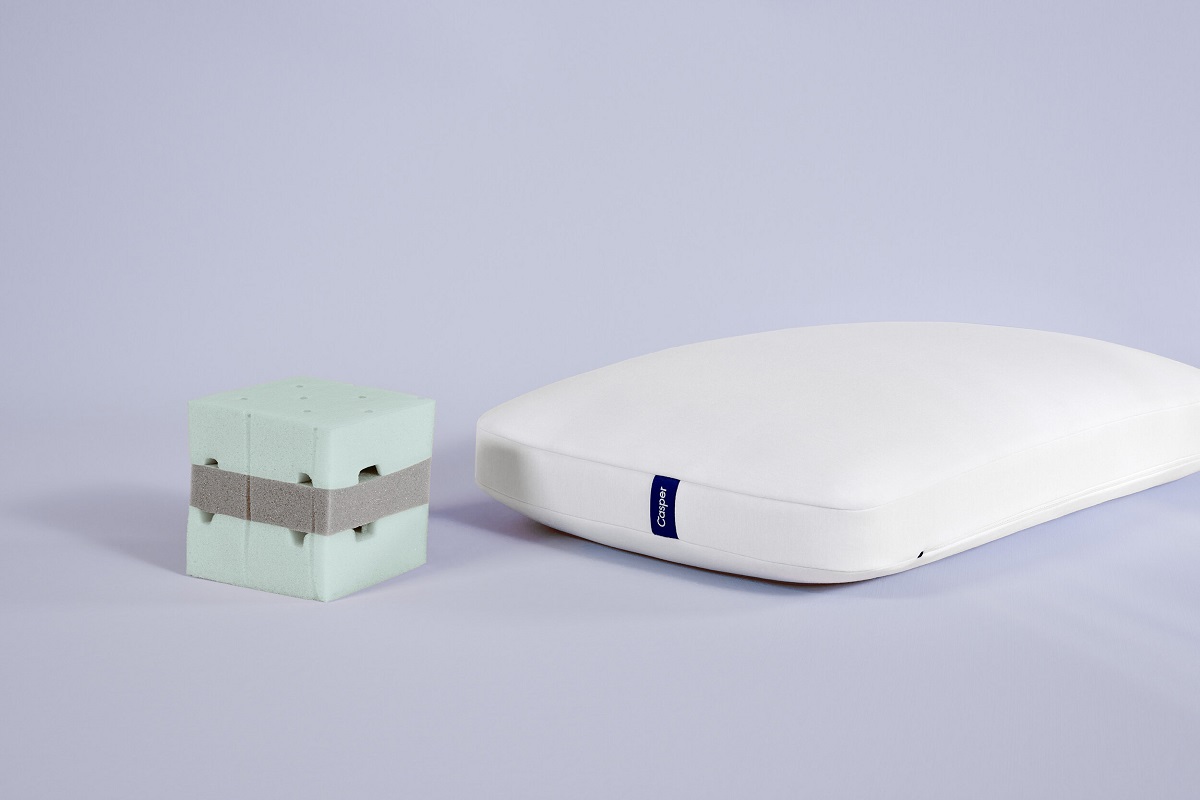